History of our Humble Kaddu – A Traditional Sweet Delight

Kaddu, or Indian pumpkin, is no ordinary vegetable. Especially in India, ‘Kaddu’ is widely cultivated and is available in all parts of the country. ‘Kaddu’, well, has a lot culinary uses in the regional cuisines from India. It is no surprise that ‘Kaddu’ (pumpkin) is widely regarded as ‘India’s national vegetable’.

Belonging to the “gourd family”, pumpkin and its cousins, such as “ash gourd” (Petha), “bottle gourd” (Lauki), etc., are used in the preparation of sweet and spicy curries, as well than sweet dishes across India. “Kaddu’s delicious sweet taste, unique gelatinous texture and ability to combine with various other ingredients make it an essential vegetable for Indian cuisines.

The best use of ‘Kaddu’ as a vegetable is in elevating the original sweetness profile of pumpkin to make a spicy curry. Chilies and spices are added to an otherwise mild and mild ingredient like pumpkin, creating a “Yin and Yang” (opposing flavors) effect. ‘Amchoor’ (dry mango powder) is added to impart the sour (Khatta taste), giving this dish an addictive flavor.

In the region of ‘Braj’ (Mathura – Vrindavan belt), no ‘Bhandara meal’ is complete without serving ‘Kaddu’, also known as ‘Kashiphal’, to devotees. Eaten with fried Pooris, “Kadoo ki sabzi” is a temple food par excellence in many states of India.

The soft texture of ‘Kaddu’ allows it to be well mashed and perfectly mixed with herbs and spices, thus creating a ‘Bharta’ preparation from the Indian pumpkin. Try the famous ‘Baingan ka Bharta’ recipe, replacing ‘Baingan’ with ‘Kaddu’; keep the dish spicy with the natural sweetness of ‘Kaddu’, promoting the perfect balance of flavors.

As we travel south, hundreds of recipes use ‘Kaddu’. ‘Dudhe Upkari’ is one of those simple and delicious stir-fried pumpkin dishes that are popular in Karnataka for its sweet and spicy taste; asafetida works wonders to give a delicious flavor to this South Indian onion and garlic free recipe.

‘Avial’, the famous culinary representative of Kerala cuisine, uses pumpkin at its best, cooking it with other fresh vegetables like beans, carrots, potatoes, etc., as well as flavoring the coconut, which seems a tailor-made combination to enhance the flavor of the pumpkin.

‘Poosanikai Sambhar’ is a typical and popular style of sambhar preparation in South India, using pumpkin as the main vegetable. Sweet and sweet pumpkin adds fantastic flavor to spicy and sour sambhar, making it even a favorite sambhar for ‘prasadams’ or ‘Bhog’ in temples.

‘Kumror Chokkha’ is a fantastic Bengali dish showcasing the delights of pumpkin and delicious flavor of Bengali cuisine, using the famous spice blend of ‘Panchphoran’ to prepare a beautifully sweet and tempered pumpkin dish. spicy.

Similarly, pumpkins, leaves and flowers are used in the cuisine of the states of Jharkhand, Bihar and Chattisgarh.

Pumpkin is known worldwide for making unique sweets and desserts. ‘Ashgourd’ (Vegetable from the pumpkin family), also known as ‘Petha’ (Sweet dish), is used to prepare regional sweet dishes in India. The craze is immense in Agra, where they prepare the crispy “Pethas”. No trip to Agra would be complete without eating the famous ‘Petha’ from the ‘Panchi Petha’ shop.

Agra ‘Pethas’ are mainly served in two variations, the conventional dry and crispy ‘Pethas’ and the sweet and syrupy ‘Angoori Pethas’. Over the years, various innovations with shapes, sizes and flavors have resulted in the sale of hundreds of different flavors of Petha in several ‘Petha’ stores across Agra.

In Hyderabad, try the fantastic “Kaddu ki kheer”. The thickened milk flavored with ‘gourd’, dried fruit and ‘Kewra’ is a true testament to the versatility of ‘Kaddu’ and Hyderabad’s great cuisine. 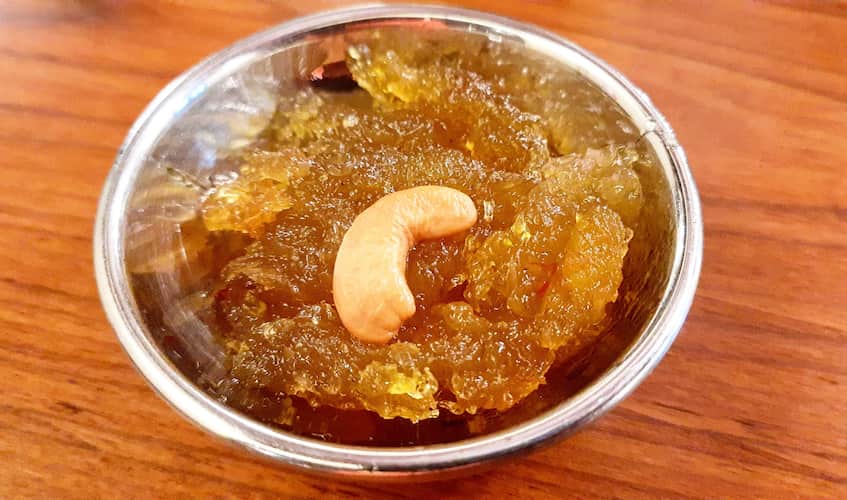 An interesting version of ‘Kaddu’ sweets can also be experienced in Karnataka, where a sweet ‘Halwa’ style is prepared called ‘Kashi Halwa’, ‘Dumroot’ or ‘Kushmanda Halwa’. ‘Kashi Halwa’ is prepared with grated ash gourd cooked in ghee, sweetened and served garnished with cashews and raisins. Recently, while exploring South Indian cuisines, I visited the famous restaurant Karavalli, At Vivanta by Taj, Residency Road. Chef Naren Thimmaiah, the legendary chef of Karavalli, prepared the “Kashi Halwa” for us. It was my first time trying an Ashguard-based ‘Halwa’, and to say the least, about its addictive taste, we were blown away by the texture and flavors it extracted from it. a typical vegetable like butternut squash.

I recently tried a delicious version of this ‘Halwa’ at Sri Venkateshwara sweets in Gandhi Bazaar, Bengaluru; it’s called ‘Dumroot’, similar in preparation; however, the style of service was slightly different from the ‘Kashi halwa’ I had tried at Karavalli restaurant.

Mr. Hari Prasad of Sri Venkateshwara sweets explained, “Halwa made from butternut squash is wrapped in banana leaves and then cooked over charcoal heat. When the banana leaves are completely charred, they are removed from the ‘Dumroot’ mound and are ready to eat. Mr. Prasad mentions how the charred and crispy outer layer of ‘Dumroot’ is loved by true connoisseurs, as not only its crispy texture, but also the flavor of ghee, cardamom and ‘Khoya’, as well as the gourd of crisp ash, can be enjoyed in this single bite of ‘Dumroot’.

Kaddu Ki Barfi is also prepared in various homes in India. ‘Kaddu’ and coconut, a classic combination, is also used to prepare another preparation ‘Halwa’ in South India. The versatility of ‘Kaddu’ is well established; however, it is worth mentioning pumpkin seeds as a snack or to add richness and texture to sauces. Pumpkin seeds are added to smoothies, or granola, for their consistency and many health benefits. Pumpkin is a healthy, light-on-the-stomach vegetable favored by people of all ages.

Although ‘Kaddu’, or pumpkin, is widely used in India and around the world, ‘Kaddu’ is still gastronomically underestimated. The distinct texture of ‘Kadoo’ and the myriad of Indian ways to prepare this delicious product certainly deserves a prominent place on the country’s gourmet menus, especially when it comes to representing the diverse cuisines of India.

Sidharth Bhan Gupta, Food and Beverage/Restaurant Consultant, Travels Through India on a Cultural and Culinary Exploration.

Spanish passions for food and football combine at Riyadh festival

Greg Sherwood MW: Two of South Africa’s best put to the test in a comparative tasting